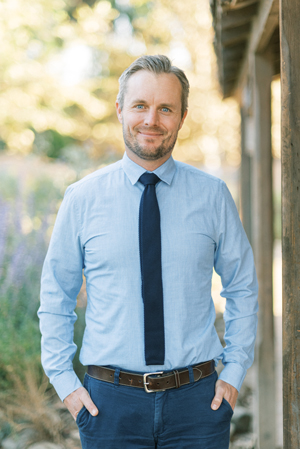 Mark Robertson was on the pre-medical track at Westmont College when he found himself increasingly drawn to Reynolds Hall, the home of Westmont’s English department. He received a B.A. in English literature, cum laude, in 2003. Deciding that a career in medicine wasn’t for him, he served as a high school and college minister in an Episcopalian church in Santa Barbara. While he thought for a time that he’d become a priest, he began to feel that God was actually calling him to a career in education. He married his wife, Vanessa, an elementary school teacher, in 2005. While living and working in Venice Beach, he earned a teaching credential and a master’s degree in secondary education, with an emphasis on literacy and language arts, from Loyola Marymount University.

Mark’s career began with an adventure. His wife had completed her student teaching in Costa Rica and had had a wonderful experience, so they decided to apply to teach together at an international school in Latin America. They took a job in the coffee axis of Colombia, where Mark worked as a middle school English teacher. After two years in Colombia teaching English learners, taking buses to far-flung places, and enjoying excellent coffee, they took new positions at the American School of Brasília, in the interior of Brazil. After three more years of travel, teaching, language learning, and adventure, they returned to Southern California. Mark taught Advanced Placement and International Baccalaureate level English at Santa Margarita Catholic High School for five years, before arriving at CVCS.

Mark finds himself refreshed and inspired in this, his third year at CVCS. The authentic character and spirit-filled community at this school make each day a deep joy and a singular adventure. He is humbled and honored to participate in the beautiful and wonderful work that God is doing in the youth of South Orange County. He is passionate about partnering with students as they think through “big questions” that inevitably arise from the study of literature. On most days you’d see Mr. Robertson’s students close reading, discussing, and/or writing about both great books and the world around them. He believes in the value of reading difficult texts, Socratic-style discussions, and writing as a process.

In his free time, Mark enjoys reading, jogging, surfing, and hanging out with his wife and his puppy Finn.