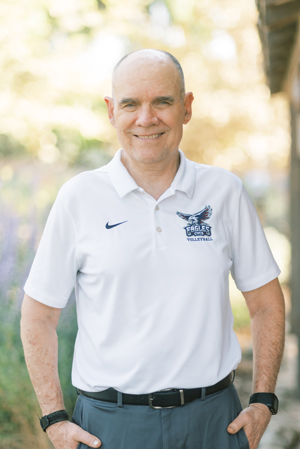 Donald Easter came to CVCS in the fall of 1976 right out of graduate school at U.C. Riverside. He had previously taught at Riverside Christian High School as a science teacher, California Baptist University as a chemistry teacher, and as a teaching assistant at U.C. Riverside in the biology department.

He accepted Jesus as his savior in February 1972, then immediately volunteered to work as a music minister and a youth pastor at Arlanza Baptist Church in Riverside. During the summer of 1976, he took a group of students to Idyllwild Pines. It was here that he first heard about CVCS. A couple of months later, he began his ministry here at CVCS as a junior high teacher.

Don always get excited when he sees one of his students “see the light” and finally get a difficult concept after much struggle. He has always loved the one-on-one interaction with students who really want to learn and understand the concepts of science and math.

Mr Easter is a big sports fan, especially for CVCS athletes. You will often see him at a CVCS sporting event, usually as a timekeeper or a scorekeeper. Back in his early days at CVCS, he started and coached a chess club team to a second place finish in Orange County.

Donald is an active member of South Shores Church, where he has been in the Sanctuary choir for the past 20 years singing bass. He is also involved in Vacation Bible School and the Easter Eggstravaganza.