Varsity Football rolls to a 41 to 0 victory over Sherman Indian! 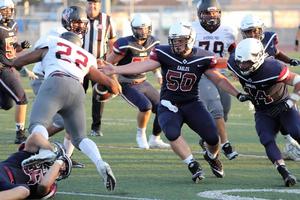 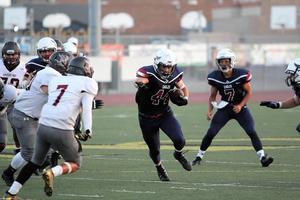 Your varsity football team ran its non-league record to 4 - 1 with a dominating 41 to 0 victory over visting Sherman Indian. The Eagles were never threatened as the defense pitched its first shutout of the season over the Braves.

Jack Roberts scored three first half touchdowns while rushing for 86 yards on just 7 carries. Seth Yu (48 yards, 2 carries, 1 reception) scored on a 20 yard scoring strike from quarterback, Tyler Henry. Henry scored on a broken play in the first quarter as he saw limited action in the second half after the Eagles extended their lead to 41 - 0. Jacob Hazzard came on in relief and rushed for 54 yards on 7 carries and one touchdown in his first extended action at running back!

The swarming Eagle defensive front turned back the Brave offense all night as Roberts, Christian Harris, Joshua Sears, and Aaron Mansfield led CVCS in the shutout!