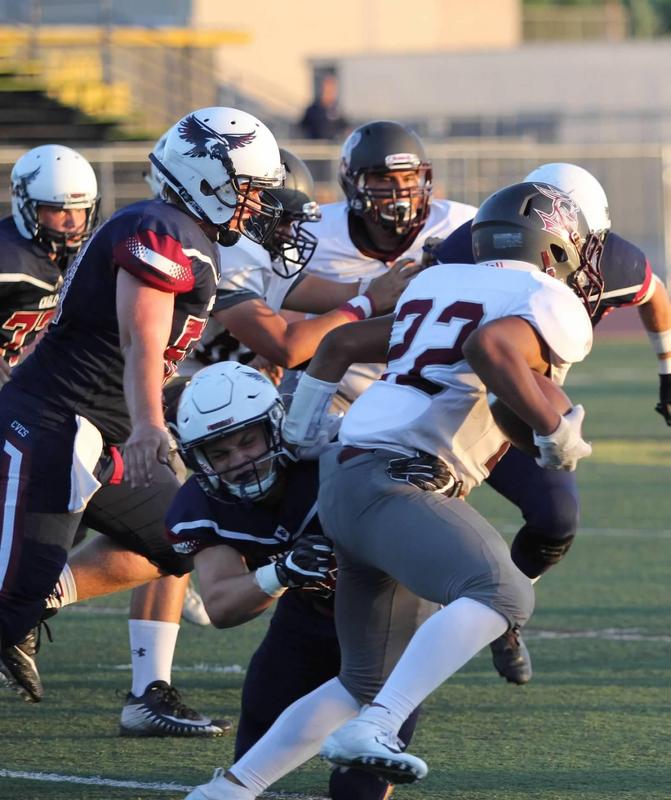 Your varsity football team ran it's non-league record to 5 - 1 with a hard fought 49 to 30 victory over Mark Keppel on Friday night. Keppel's double wing offense chewed up yardage and the clock in their attempt to keep the ball away from the Eagles.

CVCS overcame a 16 to 14 deficit with an offensive onslaught against the Aztects.
The offensive line (Stef Purgason, Christian Harris, Joshua Sears, Cole Flynn, and Noah Olson) opened up sizable holes for Seth Yu (8 carries, 209 yards, 4 td's) and Jack Roberts (9 rushes, 145 yards, 2 td's) as the Eagles scored on all 7 possessions during the contest!

Austin Lin and Roberts led the Eagles on defense with 10 tackles and 13 tackles respectively, as CVCS held their ground against the physical Keppel offensive attack. Christian Harris was all over the field as an offensive guard, linebacker, and cover man on the kickoff team, as he made some key blocks and key tackles for the Eagles throughout the contest!

The Eagles open up league play on Friday night at 7:00 pm against Firebaugh (Lynwood) at San Clemente High School.