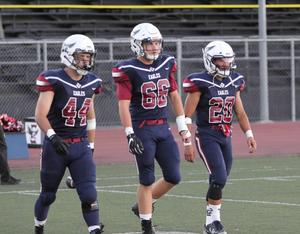 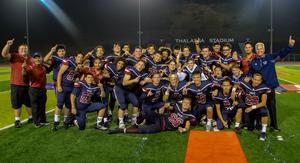 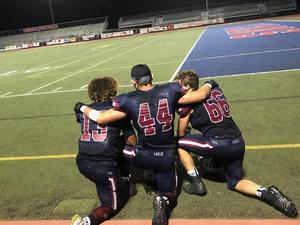 Quarterback Tyler Henry, despite being hampered by a 1st play of the game injury to his knee, led the second half rally as he completed 10 of 13 passes in the second half, (seven in a row at one point) as the Eagles battled to the end against a potent Saxon offensive attack. Henry finished the game with 17 completions on 26 attempts for 254 yards, along with two td passes and 1 rushing touchdown. Seth Yu and Simeon Marton were unstoppable as the Eagles clawed their way back from a 3rd quarter deficit of 42 to 21. Yu rushed for 151 yards on 19 carries while adding 2 touchdowns to his team leading total of 23 touchdowns on the year. Marton was nothing short of spectacular as he hauled in 11 receptions for 180 yards and one touchdown to add to his team leading total for the year of 52 receptions for 891 yards and 9 touchdowns. The offense racked up 462 yards as the Eagles kept the Saxons off balance and the crowd on their feet throughout the hard fought contest!

Jacob Hazzard had his best game of the year as he broke up several long passes while also coming up with numerous tackles on defense and special teams. Hazzard added 54 yards to the teams total yardage with two big kickoff returns.

Your Eagles captured their first 11 man football championship since the year 2000 and honored God with their attitude, effort, character, and spirit throughout the year!

Thank you to all who supported this exciting team throughout the year!

Rejoice in the Lord always. I will say it again: Rejoice! - Philippians 4:4