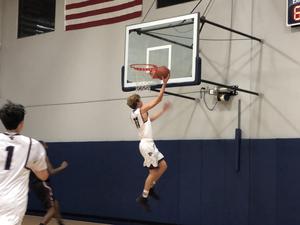 The CVCS boys basketball team put on an entertaining show by defeating Riverside Prep last night in their first home game of the season 68-54. The Eagles were led by Festus Ndumanya who scored 28 points and snared 25 rebounds. The team will host the Eagle Classic tournament next week on campus and open the tournament against Portola HS from Irvine.