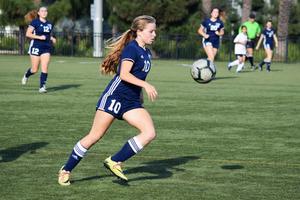 MaxPreps, the online high school sports leader and the United Soccer Coaches team up to honor the nation's best each week. Last week, MaxPreps named our very own, Mikaela Arnone, as California's High School player of the week!

Mikaela has led the Lady Eagles to an 8 - 3 - 1 overall record and into third place of the competitive Academy League, in the Western Athletic Conference. Mikaela leads the team in goals scored with 16 and has added 8 assists for a team leading total of 40 points through the first eleven games of the season.

Read all about it in the the MaxPreps article below:
Mikaela Arnone - MaxPreps - California - Player of the Week
Congratulations Mikaela!